[Originally published in The Atlantic]

The artist’s portraits of neighbors, icons, and strangers show a keen and democratic attention to detail. 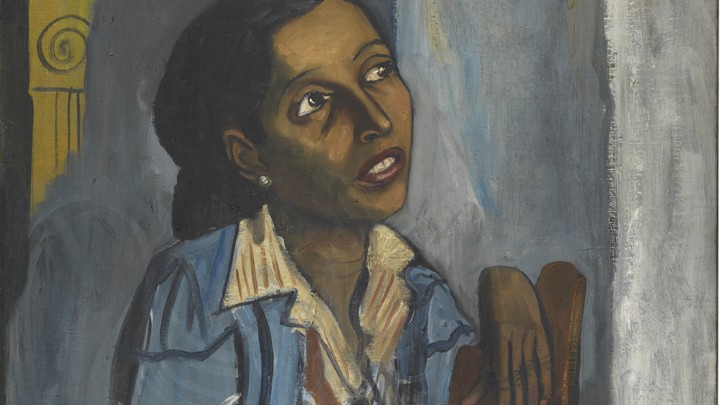 When, in 1938, Alice Neel decided to relocate from Greenwich Village to Spanish Harlem with José Negrón, a musician and her then-boyfriend, she was making a bold yet potentially career-destroying move. During the early ’30s, Neel had participated in New York’s first open-air exhibitions, held in Washington Square, which had begun to put the city on the map as a hotbed of abstract art—and had befriended artists like Joseph Solman, who would go on to found The Ten, a prominent group of expressionist painters.

In addition to being part of the decade’s zeitgeist as led by downtown artists, Neel’s own star was ascendant: In 1932, the Philadelphia Inquirer had written that her paintings “reveal[ed] the possession of interpretive gifts out of the ordinary,” while at the American Artists’ Congress exhibition in 1936, her work was singled out for recognition in the New York World Telegram. Why then, her peers might have wondered, would an artist who was just beginning to garner critical attention shun the New York art world’s epicenter for a poorer neighborhood that few knew or cared about?

The answer to this question might lie in the retrospective Alice Neel, Uptown, a fascinating exploration of the painter’s symbiotic relationship with Harlem. The show, on view at the David Zwirner Gallery in New York City, is curated by the New Yorker critic Hilton Als, who describes Neel’s subjects as “artists, writers, everyday people, thinkers, and upstarts of color”—all of whom she painted over the course of the nearly 50 years she lived and worked uptown, before her death in 1984. The potent yet personable paintings, mostly done in oil, are enduring proof of Neel’s curious, compassionate eye, on and off the canvas. “Whether I’m painting or not, I have this overweening interest in humanity,” she once said. “Even if I’m not working, I’m still analyzing people.”

The burbling, bohemian vibe of Greenwich Village didn’t hold much interest to the Pennsylvania-born Neel (she thought it too “honky-tonk”), and her portraits were at odds with the abstract expressionism that would come to dominate the New York art scene. As the art historian Jeremy Lewison has written, “Neel’s devotion to the realist depiction of the human form in an era of increasing abstraction … confirmed her position as an outsider.” Her indifference to the artistic trends of the time was partly a result of having spenta year (1926-1927) living in Cuba, with her first husband Carlos Enríquez, also a painter. According to Phoebe Hoban, in her book Alice Neel: The Art of Not Sitting Pretty, it was while immersed in Havana’s art scene that Neel came to believe that art could be political, revolutionary, and sociological, documenting and capturing everyday people in times of social crisis and cultural change.

When Neel moved to Harlem, America was slowly emerging from the depths of the Depression. Leftist circles at the time saw increasing interest in Communist and Marxist principles and ideals, including focus on the invisibility of women, class consciousness, and anti-racism, which Neel embraced. (The FBI, which surveilled Neel in the 1950s, would later describe her as a “romantic Bohemian type Communist.”) Neel, acutely aware of these wider shifts, longed for more class and racial diversity and less similarity in terms of thought and outlook. For the self-proclaimed “collector of souls,” it was uptown—first in an apartment in East Harlem, later on the Upper West Side—that she discovered the vitality and vibrancy she had been looking for.

The show, which is divided into halves based on those two apartments, contains portraits of a remarkable range of people, of all ages, shapes, and hues. Writing in the show catalogue, Als explains, “For Neel herself, everyone was equal in all their idiosyncrasies and racial differences. Everyone was a member of her club. She painted people no matter what their color, creed, or social standing, and this is what makes her oeuvre so unique.”

Each of Neel’s subjects gets the same humanizing treatment: Facial features and expressions, hair textures, and skin tones are delightfully and thoughtfully brought to life, with clever uses of color and expressive brush strokes demonstrating the painter’s versatility. Neel moves from afros to gerry curls to long woven plaits, and from dark African American skin, to a variety of lighter brown tones, with ease. Her subjects often look at her directly, holding eye contact with her, and, by extension, with the viewer; in turn, she seems to spend extra care painting their eyes, which are always emphasized slightly more than other facial features. It’s as though Neel wants to remind you to look more deeply, to see the humanity in the person in front of you.

Young children and families also play a key role in Neel’s paintings. “Two girls in Spanish Harlem” shows a pair of brown-skinned, wide-eyed girls, sitting snuggly next to one another on one chair, in dresses of different shades of pink, looking up at the artist pensively.“BLACK SPANISH-AMERICAN FAMILY,” 1950 (DAVID ZWIRNER)

“The Spanish Family” depicts a mother, perhaps single, with her four children. Many of the paintings have generic, sometimes reductive-sounding titles (“The Arab,” “Mother and Child,” or “The Black Boys”) that give scant detail about who her subjects are. Mostly this is because it became common knowledge, after years of her painting in Harlem, that Neel was willing and able to paint portraits of all kinds of people, which led to locals, often those she didn’t personally know, spontaneously stopping by her home studio to sit for her.

One of the kids who would sit for Neel was Georgie Arce, a boy she drew using ink on paper and painted in oil on canvas several times between 1950 and 1959, charting his growth from a child into a teenager. It’s intriguing to see the progression in these portraits of this lone but familiar figure: The early portraits of Arce show him as a sweet, almost angelic-looking child; however, as time goes on, one notices a marked change not only in his physicality as he becomes an adolescent, but in his furrowed brow and closed-off posture. You might wonder who and where his parents were, and you must also reckon with the knowledge, by way of a biographical note in the accompanying wall text, that Arce would eventually end up in prison, convicted of murder.

If Neel documented everyday Harlem residents, she also painted, with the same attention to expression, posture, and mood, many cultural and political icons of the time. A portrait of Harold Cruse, who wrote The Crisis of the Negro Intellectual, is included in this show, as is one of Horace Cayton, the sociologist best known for his 1945 study Black Metropolis: A Study of Negro Life in a Northern City; the latter sits in a grey suit and colorful tie, looking serious, determined, and somewhat weary. The playwright Alice Childress is displayed, too, looking regal in a blue cocktail dress and red hat. It speaks to Neel’s convictions about the sociological role that art could play that these uptown activists, intellectuals, and artists were among her subjects.

Neel’s personal possessions, which are also on view, provide more insight into her interest in social change. There are some of Neel’s own poems (one, a beautiful ode to Harlem), as well as a book signed by W.E.B. Du Bois, a handwritten letter to Fidel Castro asking permission to paint him in person, and various other books and notes that illuminate Neel’s leftist leanings, shaped by her sympathies for the Communist Party against a wider backdrop of growing revolutionary struggle around the world.

As Neel was painting, Harlem was emerging from the Harlem Renaissance and would continue to experience its own political tumult as America moved into the Civil Rights era and beyond. Neel was keen to capture the essence of those changes by way of the people living through them. The sheer variety and number of portraits she created while living in Harlem also show how important it was to her that her body of work—and by extension, the historical artistic canon—included these people of color who few artists were interested in painting at the time.

For Als, the emotional connection that Neel, a white woman, had with Harlem’s residents, demonstrates “[her] politics and her brilliance when it comes to understanding people she was attracted to.” He told me, “We read about men of color being attracted to white women, but why couldn’t it be reversed? Why can’t we see a white woman being attracted to people of difference? And, to people who she identifies with?” That unadulterated affection works in tandem with her democratic attention to detail: She never over-dramatizes or caricatures her subjects. In fact, what makes these portraits quite remarkable is how beautifully pedestrian the people in them are. They are happy, sad, serious, concerned, focused—in other words, normal.

Neel may have separated herself from her art-world peers by leaving the Village but she clearly flourished in Harlem. Alice Neel, Uptown, which travels to the Victoria Miro Gallery in London in May, reveals that Neel was indeed a visionary, who saw what others couldn’t and took a particular interest in people—children, artists, upstarts—who others passed by. In doing so, she has left us with a set of moving portraits that are sure to stand the test of time.

View all posts by Lola