Responding to the backlash, the high-end department store said it agreed the candle, priced at £160, could be viewed as inappropriate.

Luxury department store Selfridges has removed a £160 “liberated slave” candle from sale after customers complained it was inappropriate. 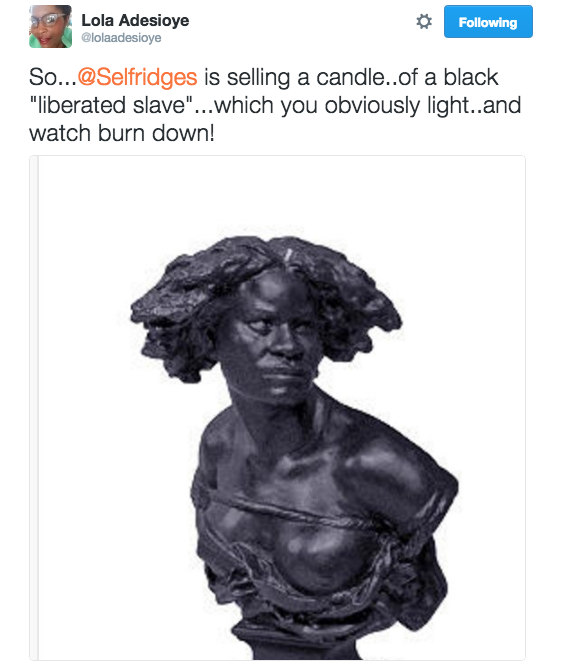 Twitter
Lola Adesioye, a writer and commentator from London who now lives in New York, told BuzzFeed News she was browsing the candle section of the Selfridges website last week and was “taken aback” when she noticed the “unusual-looking item”.
Selfridges’ website provided little context or background information about the object apart from the caption “Liberated Slave wax bust” and a brief description suggesting it should not be set alight as it is “essentially decorative”.

Selfridges
Adesioye, who read social and political science at Cambridge University, then visited the website of the candlemaker, Cire Trudon, to find out more about the item. She discovered it was part of a collection representing key figures from French history.
Cire Trudon, which was founded in 1643 and describes itself as the oldest candle manufacturer in the world, was granted exclusive rights by the French National Museum to reproduce in wax a series of busts created around 1870 by the French sculptor and painter Jean-Baptiste Carpeaux.
The company had chosen to reproduce Carpeaux’s Marie Antoinette, Napoleon, and Benjamin Franklin, as well as “Pourquoi naître esclave?” (Why born a slave?) – which is the piece that has proven controversial.

Adesioye believes the slave sculpture was not an appropriate piece of art for Cire Trudon to re-create as a candle or any decorative item.

According to @Selfridges this ‘liberated slave’ candle is a nice gift item for any occasion.

She questioned why the department store thought it was a good idea to have the item on sale – especially, she said, “given the history and awful nature of slavery and the kinds of responses and even triggers that it can provoke in people”.
“I don’t think Selfridges should have been selling it – particularly not without providing background as to why they were doing so,” she said. “And particularly not without thinking that some people might have found it upsetting – even if the woman is supposed to be liberated.”
“If there had been an artwork of a Holocaust survivor, would Cire Trudon have made a candle out of it, and would Selfridges have sold it?” she added.

After sharing a screenshot of the item on her social media accounts, Adesioye said people were “shocked” and also found the candle to be “strange and offensive”.

A Change.org petition was launched urging Selfridges to stop selling the slave candle and was backed by signatories who called it “insensitive” and “insulting”. 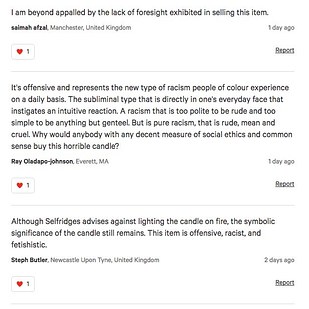 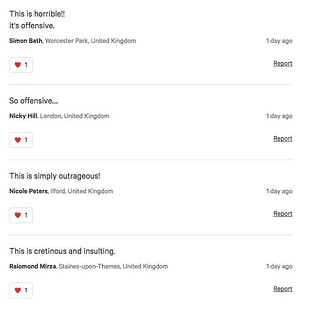 Shortly after that, a statement was released on the Selfridges Twitter account saying the store agreed the “candle could be viewed as inappropriate” and that it would be removed from sale.

A spokesperson for Selfridges also confirmed to BuzzFeed News that the item would no longer be available to buy online or in store. They declined to comment further.
Cire Trudon’s executive director, Julien Pruvost, told BuzzFeed News that the “Liberated Slave” decorative wax object is an image is of “positivity and hope” and that each piece was chosen as a tribute to the period of time when the Universal Declaration of Human Rights was first written. 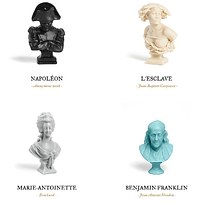 “Carpeaux always attempted to give a faithful representation of human movements; he sculpted the slave figure with a bust holding obliquely in order to express revolt,” Pruvost said in a statement.
“The figure expresses freedom and the breaking of bonds, and was created against the political and social backdrop of the revolutionary century as well as the abolition of slavery across the world. Carpeaux’s talent serves a powerful idea.”
Pruvost added that “it was never our aim to hurt anyone’s feelings”. And, since the context of the candle wasn’t provided on the Selfridges website, he believes “many reactions might have been sparked by a lack of complete information”.

However, Adesioye believes a candle depicting a “liberated slave” has no place in a department store.

“Pieces like that which have a lot of unpleasant history behind them and that provoke a lot of questions should be handled more sensitively,” she said.
“While this bust is supposed to be a piece about resistance, slavery is not a joke topic, nor something for people to commoditise and make money out of in 2016.”

View all posts by Lola